The Embassy of Ukraine was moved to Georgetown’s Forrest-Marbury House, Georgetown, in 1992. It was constructed in 1788. Uriah Forrest was a Georgetown mayor at one time. The house was purchased by William Marbury in 1800. This is the William Marbury that didn’t receive his commission. John Marshall may not have made it to Georgetown in the time he needed. Marbury lived at his home during the Marbury v. Madison litigation.

You can clearly see the plaque in the media coverage on the Ukrainian embassies. 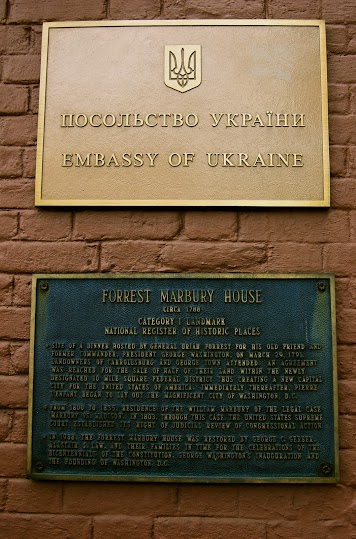 Residence of William Marbury, the lawyer from 1800-1835 Marbury v.Madison. Through this case in 1803, the United States Supreme Court established their right to judicial scrutiny of congressional actions

While the second sentence might not be correct, I appreciated Marbury’s recognition.