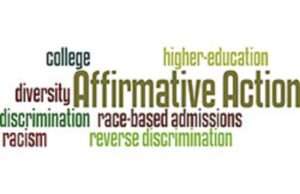 Two cases challenging college admissions based on race were heard by the Supreme Court. We don’t have any certainty, but it appears highly probable that the Supreme Court’s conservative majority will seize this opportunity to revise or seriously curtail its previous use of the “diversity” argument to support such preferences.

This potential has led to renewed interest in alternatives to the use racial preference. You could replace these preferences with preference for descendants of American slaves. The article was published in Boston Globe I was critical of the diversity reasoning when a Boston NPR reporter contacted me to inquire about an alternative. David Bernstein (co-blogger) also discussed this option in an excellent blog post. Classified: America’s Untold Story of Racial Classification. Georgetown University is already using a smaller version of this policy to admit descendants of slaves it purchased and sold in 1912. The reporter’s response is expanded in this post.

My view is that replacing affirmative actions based on race with preference for descendants of slaves in America (“ADOS”) would make a substantial improvement to the status quo. This approach has important downsides.

This policy could avoid some of the problems of traditional, race-based affirmative actions depending on its structure. It would be free from racial categories. It avoids all the moral problems of discrimination based on race.

It would also  likely avoid the legal problems, as well. Like race discrimination preferences, those based on ADOS status don’t seem presumptively inconstitutional. The Supreme Court’s current precedent would allow for minimal scrutiny of the “rational basis”, which would make it likely to pass. Preferences for descendants of slaves also would not violate Title VI of the Civil Rights Act of 1964, which bars  discrimination “on the ground of race, color, or national origin” in any program receiving federal funds.

Furthermore, by limiting admissions preference to descendants of slaves, affirmative action would return to its original purpose of compensating those who were victims of historic injustices. It is a better justification for the flawed “diversity theory”.

But, despite its attractions,  giving preferences to descendants of slaves raises several difficult problems of its own.

How do we check if a particular applicant is a member the appropriate group? There will be clear incentives to fraud or deceit if we depend on self-identification. Problems can also arise from university officials requesting verification of applicants’ ancestry. There might be no reliable records in many cases. This could even include documents from the time of slavery. It is possible to spend a lot of money and be intrusive on the background investigations of potential applicants.

The second issue is how to categorize the vast number of mixed-ancestry people. Millions of Americans who look “white” and are perceived as such by society  have slaves or former slaves in their family trees. It would be possible to grant ADOS preference preferences to anyone with this ancestry, even though it could only apply to those whose claims to have been victims of racial injustice are at the very least highly questionable.

On the other hand, if  only sufficiently “black” descendants of slaves qualify as true descendants of slaves, then we are right back to using racial classifications. This would lead to the exact same problem that the ADOS strategy was intended to address. It is possible to fall prey to bias and subjectivity in trying to figure out who is black enough to claim to be a descendant of slaves. This is a history that has not been encouraging in terms of racial classification.

Finally, there are also difficult moral and philosophical issues with assuming that anyone who is a descendant of slaves (even if they are “authentically” black)  is automatically a victim of  injustice himself or herself.

Here’s an example taken from my family history. My family is Russian Jew. I descend from people who have suffered pogroms, Holocaust and other Soviet and Nazi injustices. Do you think that I am a victim to anti-Semitism? If so, should I be compensated (perhaps by the Russian and German governments?) Perhaps. The issue is however highly disputable.

Without the numerous injustices committed by different Russian and German governments, it is almost certain that I would never have been born. My grandmother, who lost almost all her relatives, including her husband in World War II, was among the many victims of Leningrad’s brutal 900-day siege. These terrible events, which were the result of Hitler’s dictatorship and Joseph Stalin’s Nazi-Soviet Pact, would have prevented her from marrying my grandfather (whom I met shortly after the war) or giving birth to me. Even a slight deviation from the actual sequence of events would not have stopped me from being born. A perverse but true sense of the matter, I’m at least as guilty as Hitler and Stalin of my injustices.

For me, what is true is the same for almost everyone today. We would all be dead today without our history of inhumanity.

This is not applicable to policies that aim to compensate individuals who have been directly victims of unfair policies. It does not impact the logic of compensation payments for Holocaust survivors or for the late and insufficient compensation given to Japanese-Americans held captive during World War II camps. This is not a problem when it comes to compensation for victims’ descendants. They have been adversely affected by those injustices in the long-term.

Even aside from the possibility that, but for the history of injustice, they wouldn’t exist in the first place, it is often difficult to determine where a given individual would be if not for the wrongs  suffered by their ancestors. Some slave descendants, such as some Holocaust survivors or Japanese-American internees, are still wealthy and well off today. Myself, a law professor, am relatively well-off. These people might be happier and richer if it weren’t for their terrible past. However, it is difficult to determine which side you are on.

Perhaps this problem can be solved by providing compensatory preferences that are limited to the relatively poor or disadvantaged members within the appropriate group. However, it won’t be simple to determine where the line is drawn. It also doesn’t seem like any institution can do that objectively.

There are some advantages to replacing traditional affirmative actions with preference limited to descendants slaves. Any such program, however, would face serious difficulties on its own.

However, these are not legal objections. Although public universities are closer to the truth, unlike racial preference, they would not be considered presumptively inconstitutional. My belief is that government institutions have greater nondiscrimination requirements than private organizations. They should also have stronger presumptions to prevent discrimination based upon ancestry. This can often lead to grave harm even though it’s not based on racism. Discrimination on the basis of parentage or place of birth in many cases is just as unjustifiable as racial. Even if these policies are not necessarily unjust or legal, we should still be able to come up with reasonable solutions for the above problems.

Perhaps it is worth noting, however that I have concerns regarding preferences based upon ancestry which also applies to legacy preferences still being used by select universities. These preferences cannot be supported on the basis that they correct historic wrongs. They should be abolished by schools, just as Amherst College, my undergraduate college, did recently.