COVID-19 was a pandemic that disrupted school and transformed kitchens into classrooms. The COVID-19 pandemic seems to have ended a decade-long stagnation in American homeschooling.

Although homeschooling is allowed in every state, the regulations differ from one place to the next. However, there was a slight boom in the latter 1990s and 2000s. More than 3 per cent of American school-age children had their primary education at home by 2012. These numbers slowed down, and then exploded again after the outbreak of the pandemic. Census Bureau data show that at the start the 2020-21 school school year, 11 percent of U.S. families with school-aged children had homeschooled. Black families reported the greatest increase in homeschooling, because they were historically less likely to do so before the pandemic.

Much of the sudden increase was no doubt due to necessity—schools being closed or operating virtually—or due to parents’ worries about the pandemic. Unsurprisingly, these numbers declined a lot by Christmas 2020, but they were still well above the pre-pandemic peak.

While we will not have any new census data regarding the homeschooled population for the next few months, indications are that there may be some permanent changes due to disruptions brought on by the pandemic. For example, a recent poll found that homeschooling continues to gain popularity as the pandemic drags along. 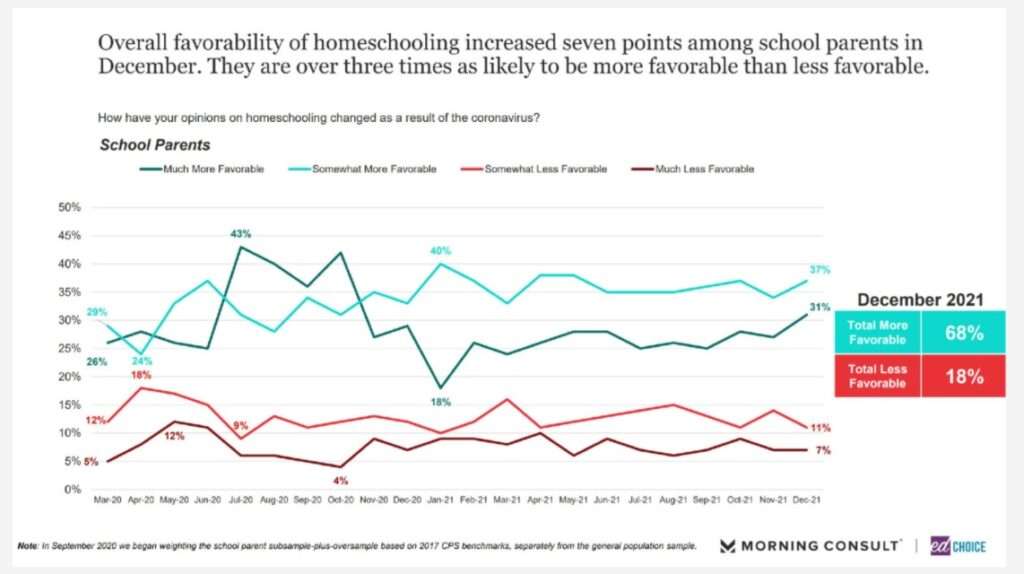 Morning Consult surveyed more than 2,200 parents to find out their views on the various aspects and benefits of school-choice. In the section about homeschooling, 68% of parents had “favorable”, with an increase in strongly favorable opinion.

The popularity of “learning pods”, small groups of children who gather under the supervision of adults to homeschool or go virtual schooling, is a major reason why homeschooling rates have increased. Although initially created on an irregular basis, pods became more common in American K-12 education.

Morning Consult/Ed Choice poll revealed that 89% of learning pod participants use learning pods to complement regular schooling while only 11% of podders consider them to be a replacement for traditional school. The number of learning-pod homeschoolers may continue growing, with 31 percent of those parents saying they are interested in learning pods as an alternative to school.

December marked the third consecutive month in which Ed Choice found an increase in the number of parents who said they were interested in learning pods—perhaps due to the rise of the omicron variant and the renewed threat of school closures. In order to let their kids participate in pod learning, on average parents were prepared to spend $469 per month. This suggests that there is a strong market for entrepreneurial pod-learning opportunities, which will not disappear as soon as the pandemic passes.

And, as the census data from last school year suggests, the rise in homeschooling is not merely a consequence of white, Christian families—the dominant demographic in homeschooling during recent times—exercising greater control over their children’s educational path (or becoming disenchanted with the politicization of public schools). These days, it’s Hispanic and black parents who have this choice.

“I know that the majority of parents I talked to are deeply thinking about ways they can give their children the best education and the greatest social opportunities. They see this choice as a reprioritization of values, an opportunity to really get to know their kids and nourish their natural curiosities,” writes Newberry (though she repeats the inaccurate claim that “homeschooling is also largely unregulated in many states.”)

You might find that your ideas for how to best educate yourself child are flourishing because of the current pandemic. The census data, polling, reporting, and reports all show that homeschooling parents choose to do so during COVID for reasons other than the chaos.