Glasgow—The Freedom and Climate Symposium was convened on November 8 at Strathclyde University by the think tank the Conservative Coalition for Climate Solutions (C3 Solutions) as a concurrent event with the United Nations Framework Convention on Climate Change’s 26th Conference of the Parties (COP26). In order to address the issue of climate change, the symposium brought together finance specialists, young conservative climate activists and energy entrepreneurs. These solutions were in sharp contrast to those promoted at COP26 by the majority of participants.

One example of such proposals was Rod Richardson of the Clean Capitalism Leadership Council, who proposed clean tax cuts to help accelerate funding for technologies that lower greenhouse gasses such as carbon dioxide. Venture capitalist Andy Karsner, an ExxonMobil Board member and rebel, promoted the Climate Leadership Council’s carbon fee-and dividend plan. This would place a price for carbon dioxide emissions, and then rebate any revenues that are collected in annual dividends of approximately $2,000 per family.

Richardson said that Richardson’s proposal would ease constraints on investors and entrepreneurs while the carbon tax would put burdens upon consumers and businesses. Karsner argued that it was important for investors to have stable prices in order to stimulate investment and the adoption of emission reduction technology. Participants wondered whether tax cuts could really encourage clean energy investment, as the current interest rate is very low. Some participants were concerned about the public’s reaction to carbon emissions starting to drop and dividend checks beginning to shrink.

Already, markets play a significant role in cleaning the environment. In general, a cleaner environment means a more open market. A country with a free market means its carbon emissions have already fallen. Nick Loris, C3 Solutions Director of Public Policy made clear this in the report “Free Economies.” Are Clean Economies.”

Loris used data from Heritage Foundation’s Index of Economic Freedom to rank 180 countries. This index evaluates measures like how they are protecting property rights, the size of government, efficiency of regulatory regulation, openness of markets, and other factors. These calculations result in the Index identifying countries as free, repressive, unfree mostly, somewhat free, relatively free, most free, or both. Loris then compared the economic freedom scores with Yale University’s Environmental Performance Index. This index ranks 180 countries on an 100-point scale and evaluates their performance in respect to water and air pollution, biodiversity and agriculture. 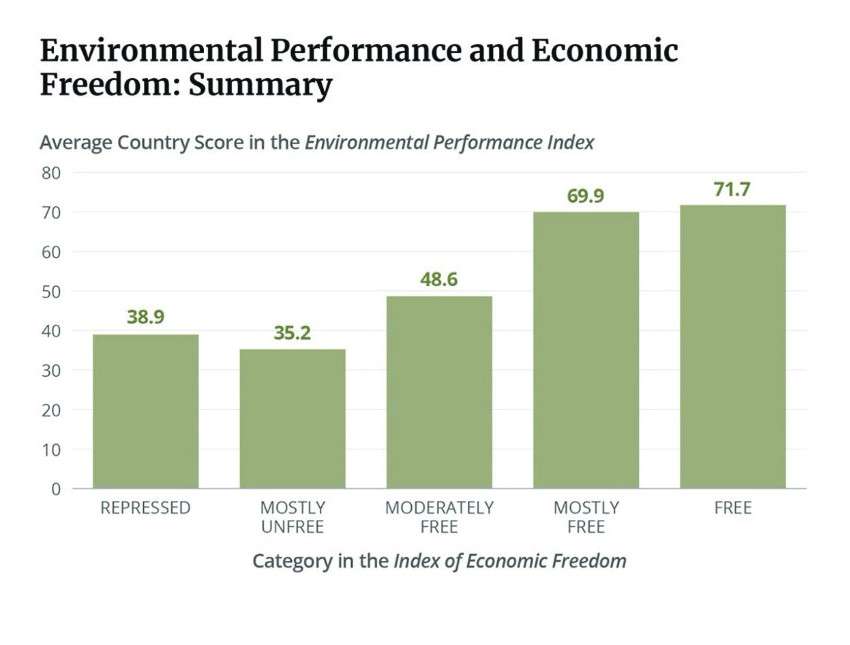 Loris claimed that there is a correlation between freedom, environmental quality, and industrial growth. This concept, which says the environment deteriorates initially, but then improves over time, as people become more wealthy and demand clean water and better air quality, as well as environmental amenities such as parks and cleaner water, clarified air and clearer skies, was supported by Loris. Loris referenced a University of Aarhus research that shows there might be an EKC for carbon dioxide. Christian Bjørnskov analyzing the income and emissions trends in 155 countries since 1975. Bjørnskov found that carbon dioxide emissions begin to decline in a country when average income reaches around $52,000 per person. IIn addition, the researcher found that overall greenhouse gas emissions start declining from approximately $25,000 in GDP.

Consequently, Bjørnskov found that rich, economically free democracies such as Australia, Canada, the U.S., and much of Northern Europe have likely already passed the turning point of the carbon dioxide Kuznets curve. It’s worth noting, however that U.S. CO2 emissions reached their peak in 2007, when the per capita income was approximately $48,000.

““Environmental Kuznets Curves can be found to the left in economically-free societies. This indicates earlier adoption of clean technologies and a faster transition toward a society with lower emissions.” Bjørnskov Contrarily, even though many claim a better environment is their central goal, most interventionist governments will achieve the contrary.”