Portland Bureau of Transportation wants its residents to be aware that safety on the roads is not something they should laugh at.

According to reports, transportation workers took down a “Merge Simpson”, sign placed by an unknown artist in front of an I-405 ramp. The OregonianThis is a. It featured Marge Simpson, a popular cartoon character. The sign was cleverly mounted in foliage or foilage. The sign resembles Marge Simpson’s signature beehive style.

It attracted much attention. social mediaLocal news media. The PBOT seemed less interested. A bureau spokesperson told The Oregonian They “appreciate Portlanders’ sense of humor”, but the sign covered a pedestrian crossing sign.

MERGE SIMPSON… have you seen this yet? A new character from the ‘Simpsons’ series has been added to this page @inDowntownPDX. Marge has become a ‘Merge Simpson,’ with long hair. She will help navigate you to I-405 North. You will find this near the Ned Flanders Pedestrian Bridge! #LiveOnK2 #pdxtraffic #Simpsons pic.twitter.com/srBnjq0mXn

The PBOT isn’t the only one to crack down on those trying to beautify Portland. It tried to prevent local anarchists from trying to fix up the potholes where they weren’t yet.

This episode shows the simple act of government closing down competition. Merge Simpson’s sign was removed because it replaced a warning sign reminding drivers that pedestrians are to be viewed with caution.

That said, a look at Google Maps suggests the existing street crossing—which cuts across the interstate on-ramp and is unmarked except for a pedestrian sign partially covered by plant matter—is already pretty dangerous. 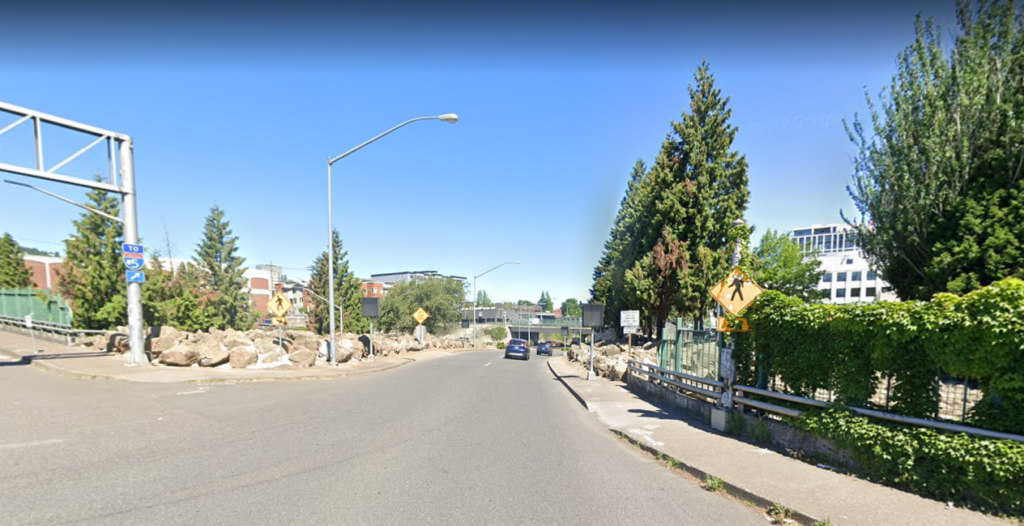 The PBOT might spend more time looking at what features could make the intersection safer than removing those features.